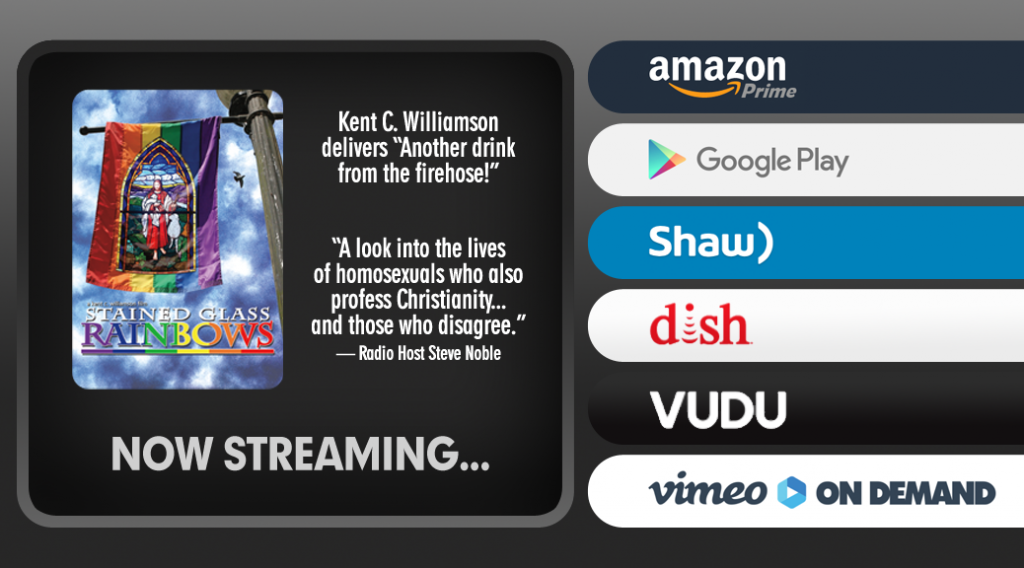 We are pleased to announce the streaming release for Stained Glass Rainbows!

An important and timely film for the Christian Church as it attempts to reconcile their faith with Gay Christians.  Kent C. Williamson interviews people with view points from all sides to explore the questions: Can you be Gay and Christian? Can you love your Gay neighbor as your self?

Stained Glass Rainbows explores the most controversial subject facing America today: the collision between the LGBT community and the Christian church. Can Gays be Christian? Is homosexuality a sin? Is there a Gay gene? Is there such a thing as an ex-Gay? Both families and churches are being torn apart over these divisive issues. Stained Glass Rainbows brings together the voices of the left, the right, the middle, and helps bridge the gulf through its dialogue. From gay pride parades to anti-gay protests, Stained Glass Rainbows confronts the controversy of faith through the hearts and minds of people on both sides of this uncivil war.

What audiences are saying:  Kent C. Williamson delivers “Another drink from the firehose”. Stained Glass Rainbows is “a long-awaited, much needed contribution addressing the challenge to speak truth in love without judgment and condemnation,  but with understanding, compassion and care.”

Steve Greisen, President of Exploration Films says, “Kent is making a courageous move as a filmmaker to tackle the ‘untouchable’ Gay issue in his new film Stained Glass Rainbows.”

Theologian Robert Gagnon says, “Stained Glass Rainbows is the only film I know that gives fair attention to different perspectives on homosexuality in an entertaining fashion. For persons and communities interested in watching a film about homosexuality that offers multiple perspectives while holding their attention, this is it.”

And film reviewer, Justin Harlan says, “You hooked me with the first line of the film… wow!”

Stained Glass Rainbows was seven years in the making and was filmed on location from Washington, DC to Orlando, to Cincinnati, Pittsburgh, New Haven, Connecticut, and Charlottesville, Virginia.

Learn more about the Film: www.stainedglassrainbows.com